Will the deployment of the 5G MIMO towers in India will be challenging because of the lower safety limits for emissions from cell towers? India has implemented safety limits for emissions of radiation from cell towers that are 1/10 of the ICNIRP guidelines. Presentation by Christer Törnevik, Senior Expert, EMF and Health, Ericsson Research, Stockholm, at the TU Workshop on 5G, EMF & Health Warsaw, December 5 2017, shows the problem: S3_Christer_Tornevik

Below is shown the distribution of radiation from 5G MIMO tower, located on the top of the high-rise building, when the radiation limit is 1/10 of the ICNIRP guidelines.In this setting placing 5G MIMO cell tower on top of the building is not possible without breaking the exposure limits in the apartments located at the top levels of the building. 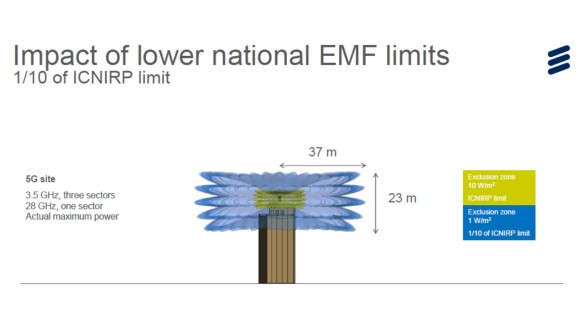 Below is the distribution of radiation from 5G MIMO tower, located on the top of the high-rise building, when the radiation limit is 1/100 of the ICNIRP guidelines. In this setting placing 5G MIMO cell tower on top of the building is impossible without breaking the exposure limits. 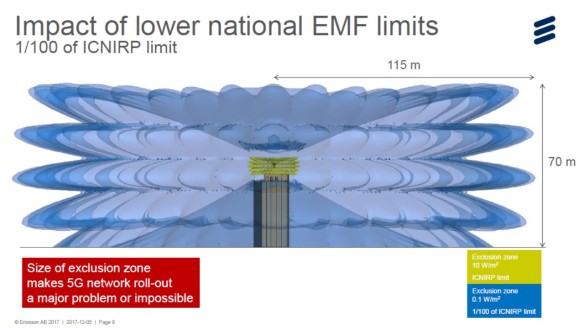 Those who wondered why the industry does not ask ICNIRP to lower exposure limits when the devices emit only fraction of allowed radiation level. This is the reason why the telecom industry is resistant to ideas of lowering exposure limits even if the currently used devices would allow to do so. One never knows what the power will be needed for the devices developed in the future.

Example of the problem is as illustrated above from India. Citizens complained about cell tower radiation. Limits were lowered. Now there will be problems with 5G deployment. It is “easy” to lower the limit but it is very difficult to bring it back to higher level when needed…

This is also the reason why ICNIRP is “toying” with the idea of increasing the exposure levels for the 5G (see notes from Rodney Croft talk).