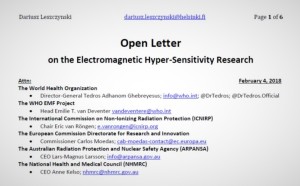 Open Letter is available in pdf format from this link:

To the attention of:

The end of the road for EHS (IEI-EMF) provocation studies

Part of the population considers themselves as sensitive to radiation emitted by the wireless communication devices and networks. Different studies have indicated that ca. 0.5 – 11% of the population might be experiencing sensitivity symptoms. This ailment, called either electromagnetic hyper-sensitivity (EHS) or idiopathic environmental intolerance attributed to electromagnetic fields (IEI-EMF), is currently not considered by the World Health Organization as being caused by the exposures to electromagnetic fields (EMF). While the symptoms experienced by some persons are acknowledged as health impairment, the cause of these symptoms is considered to be unknown.

As I argue below, all of the to-date executed EHS provocation studies provide unreliable results because of several drawbacks in the design and execution of the experiments.

Using, as it is done now, of such ‘subjective’ and scientifically unreliable data to support health policy decisions concerning the EHS/IEI-EMF is a mistake.

Any attempts at improving the methodology of the provocation studies will not lead to the generation of ‘objective’ and reliable scientific data. The data will remain to be ‘subjective’ and scientifically unreliable.

A research group at the Wollongong University in Australia, part of the Australian Centre for Electromagnetic Bioeffects Research (ACEBR) funded by the National Health and Medical Research Council (NHMRC), is currently playing a leading role in the research on EHS. The research on EHS, executed by the Wollongong group, follows the suggestions provided by the Australian Radiation Protection and Nuclear Safety Agency (ARPANSA).

This means that the ARPANSA considers EHS research as of low importance and questions the need for further research altogether. This is a mistake.

The Question: is EHS caused by EMF?

The answer to the question whether EMF might cause EHS is – yes.

There is no scientific reason why the EMF could not cause EHS in some part of the human population. There is a well-known, and scientifically well-established, phenomenon of the individual sensitivity (Foray et al. 2012). Individual sensitivity means that, because of the genetic and the epigenetic differences between people, different persons have different sensitivity to the same exposing factor (radiation or chemicals).

The phenomenon of the individual sensitivity to radiation is well known for ionizing radiation (Bourguignon et al. 2005a, 2005b), for non-ionizing ultraviolet radiation (Rees 2004, Kelly et al. 2000) and for ultrasound (Barnett et al. 1997).

Therefore, it is scientifically justified to suspect (assume) that the individual sensitivity exists also for the EMF exposures. However, the essential, but still unanswered questions are:

In the ARPANSA Report, the so-called ‘well conducted provocation studies’ have major methodological drawbacks that invalidate their scientific conclusions.

The scientists executing provocation studies claim to be examining a causality link between EHS and EMF in volunteers suffering from the EHS. However, the scientists do not know how many, if any at all, actual EHS persons are present in the experimental group of the volunteers.

In all provocation studies the experimental group has been assembled from the persons that responded to a recruitment announcement by the scientists. Because there is not existing any objective method to diagnose the EHS, the scientists rely completely on the volunteers’ self-diagnosis.

This means that the group of the volunteer EHS persons might be contaminated, to an unknown degree, by erroneously self-diagnosed EHS persons. In fact, in extreme case, it might be that none of the EHS volunteers has a correct self-diagnosis of the EHS. Because the volunteer groups in the provocation studies are small, or extremely small, as in the recent study from the Wollongong group (n=3!)(Verrender et al. 2017), the potential impact of the ‘contamination’ by the falsely self-diagnosed EHS will have significant impact on the study outcome.

Drawback #2. Bias introduced by exclusion of persons with prior health problems

Drawback #3. Bias introduced by fear and by reputation of the research group

An additional bias might be introduced, seemingly independently of the scientists, when the volunteers who expressed interest in participation in the study, withdraw or are not responding to scientists’ inquiries. E.g. in the case of Verrender and co-workers’ study (Verrender et al. 2017) the number of volunteers who withdrew from the study was very high – 16 persons out of the initially agreed 25. The withdrawals might be caused by fear of the health effects caused by the voluntary radiation exposure in the experiments. However, there might be also a scientists’ reputation-dependent withdrawal. This aspect has not been mentioned or examined in any of the provocation studies. When the initially agreeable volunteers become aware of the publication record of the scientists and their publicly expressed opinions about the EHS, it might cause withdrawal of some of the volunteers, who might ‘distrust the scientists’.

Another problem with the EHS provocation studies is the experimental set-up and methodology. None of the experimental exposure set-ups and methods to analyze volunteers’ responses to exposures have been proven to be sufficient and adequate to detect a causal link between the EMF exposures and EHS. Assuming that the EHS phenomenon exists, as presented above, the scientists have had no positive controls in their experiments to show that their experimental approach works correctly. It is unclear whether the methods, assumed to be adequate for detecting EHS, have indeed had the capability to do so. Furthermore, the design of all provocation studies has been set to detect only an acute EHS, hence being unsuitable to detect delayed or chronic EHS outbreaks.

It is likely that the conclusions of EHS provocation studies are invalidated by the placebo and nocebo effects. Placebo and nocebo show the ability of the human mind and beliefs to alter the physiology of the human body (Benedetti et al, 2011, Tinnermann et al. 2017). All persons volunteering in the EHS provocation studies certainly have an opinion about the possible effects of EMF on human health, no matter what this opinion is. The responses given by the self-diagnosed EHS, given in the course of the experiments, have certainly been influenced by the volunteers’ pre-existing opinions about the EHS and by the emotional stress caused by the participation in an experiment. Furthermore, the experiment-associated emotional stress will not be eliminated by performing experiments at the home of the volunteer instead of the laboratory.

Thus, data collected in the EHS provocation studies is not reliable and objective but it is unreliable and subjective, because it is based on subjective feelings and beliefs. Claiming that such subjective, beliefs-contaminated, data is scientifically reliable is incorrect.

The above-listed methodological drawbacks clearly indicate that the data obtained in all to-date executed EHS provocation studies is unreliable and insufficient, neither to prove nor to disprove, the existence of causal link between the EHS and EMF.

What next with the EHS research?

The provocation approach needs to be replaced. It is a high time to stop research efforts focused on provocation tests, being of low sensitivity and producing subjective data, and move on to the physiology-based research. Physiological studies, examining the molecular level responses of human tissues and organs to EMF exposures, will provide the evidence of individual sensitivity and basis for further research (Leszczynski 2014).

Finally, the discussion about human sensitivity to the EMF has been severely skewed not only by the demands and attitudes of the self-diagnosed EHS persons but also by the attitudes of the scientists who “blindly” followed in their footsteps and conducted, nearly solely, provocation studies, instead of considering other scientific approaches.

The research and the debate should shift from the issue of the validity of the self-diagnosis of the EHS to the more general problem of whether the current EMF exposure limits are sufficiently protective for all users, no matter their age or health status. Are some persons more sensitive to EMF exposures?

Efforts should be focused on finding, through physiological means,  whether different subsets of human population have different sensitivity to the EMF and whether differences in the sensitivity to EMF will translate, in due time, into health risks or whether human bodies will adapt and become resilient. This can be achieved by using modern methods of proteomics, transcriptomics and other ‘omics’ technologies to find proteins, genes and metabolites that are affected by the EMF exposures. This detailed molecular level response information should be then used to formulate the knowledge-based hypotheses concerning possible effects of EMF exposures on human health.

7 thoughts on “Open Letter on the Electromagnetic Hyper-Sensitivity Research”