The starting point to squash conspiracies and all forms of disinformation is to perform validation of the science review by ICNIRP, GSMA and MWF should consider the potential consequences of potentially incorrect scientific opinions provided by ICNIRP and followed by the telecom industry. Members of ICNIRP do not have any legal responsibility for their opinions but the telecom industry has legal responsibility if the telecom devices will cause health harm. Opinions of ICNIRP are challenged not only by the so-called anti-5G activists. In 2011 IARC performed evaluation of science related to cancer and based on studies from Interphone and Hardell classified RF-EMF as possibly carcinogenic to humans. At the same time, ICNIRP has published review article on epidemiology and using the same studies, Interphone and Hardell, arrived at conclusion that RF-EMF has no impact on cancer. It means that two groups of scientists, neither being made-up of activists, arrived at very different conclusions. It means that ICNIRP not necessarily provides best review of science. This is the reason for my call to validate science review of ICNIRP by another set of scientists, with more diverse opinions and not the “single truth” opinion of ICNIRP. MWF and GSMA should carefully consider what is in their best interest – to continue following ICNIRP or engaging support of independent review of ICNIRP science. Any comments or responses? 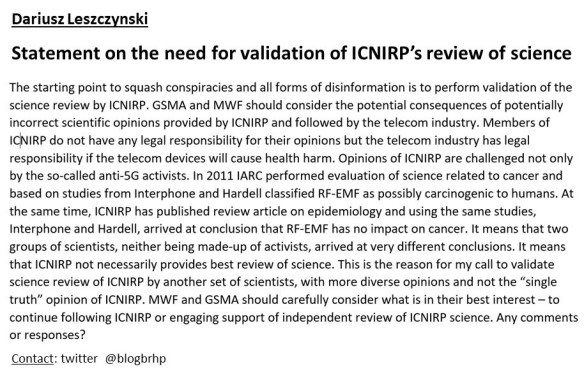 8 thoughts on “Leszczynski: Statement on the need for validation of ICNIRP’s review of science”