The last plenary session of the BioEM2016

was dedicated to epidemiology with the title inviting to debate “New avenues of epidemiological research – added value or old challenges, or both?“. The set of invited speakers was also impressive, with Mireille Toledano (COSMOS), Elisabeth Cardis (GERoNiMO) and Martin Röösli (HERMES within GERoNiMO). This setting kept people at the meeting and the last session, what not often happens, was well attended (photo).

Unfortunately, the inviting to debate title of the session did not do the trick. Debate was sluggish and conventional. But also the presentations did not speak about any really “new avenues” of epidemiological research. The speakers presented and justified designs of the ongoing studies, COSMOS and GERoNiMO, with a bit of preliminary data. Nothing yet to get excited but the projects are still “young” and gathering data, what is a slow process. COSMOS just collected the first five years of data and we should expect soon first publications. GERoNiMO was in works for just a couple of years so there is not yet time for published results.

So, there was really not much new presented as “new avenues in epidemiology”. However, one old/new issue got, at least me, excited. It happened in presentation of Martin Röösli…

One common problem, coming across all presentations, was the lack of a good and reliable exposure data for epidemiological studies. Technology is changing very fast. Phones used by study subjects are becoming rapidly obsolete and outdated and are replaced with new units several times during the course of epidemiological project. What is more, phones are not the sole source of exposure. Yes, phones are the major source of the radiation exposure but other sources, like wi-fi, wlan, DECT, to name just few, should not be neglected. Furthermore, in the era of smart phones, people keep in pockets phones connected to the internet (should not!). This causes that during data traffic areas of the body close to the location of the pocket are exposed, in some circumstances as much as during a call. This means that some significant exposures are “relocating” from head to other areas of the body.

COSMOS study, for example, tediously collects data on numbers of performed calls and send messages, but it has no information at all about wi-fi exposures. So, how valuable and reliable will be the exposure data collected by COSMOS? I dare to say that it will be of very little real value. Epidemiological studies published with such data will remain unreliable and, most likely, will not show any dose dependency of exposure and health outcome. The reason is “simple” and should be obvious to anyone dealing with dosimetry.

Graph, taken from my recent lecture at Monash University, explains, in a very simple way, why the calling minutes or years of contract with an operator are nearly worthless surrogate for the real radiation exposure data.

Most of the exposure user receives from the cell phone. The further the cell phone is from the nearest cell tower, the more radiation cell phone emits to connect. Furthermore, any radiation absorbing obstacles between the cell phone and the cell tower, e.g. buildings or natural terrain, will cause the  cell phone to emit more radiation. Thus, two persons making call of the same length may be (will be) exposed to a dramatically different levels of radiation, depending on person’s proximity to the cell tower. This means that placing two persons in the same exposed group, based on the length of the calls (or years of subscription with an operator), as done in epidemiological studies, puts together, in the same “exposed” group, highly exposed and minimally exposed persons. This might be the reason why the epidemiological data do not show, in more robust way than the three case-control studies, that highly exposed persons are at risk of developing brain cancer. This might be also the main reason why the dose dependency was never seen and it is likely it will not be seen in COSMOS and in GERoNiMO. Epidemiological studies are mixing high and low exposed persons in the same exposure groups! 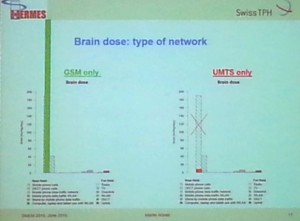 (green bar = exposure using GSM network and red bar = UMTS network). It speaks for itself. Exposures of persons speaking using GSM network are dramatically higher form those using UMTS network. However, which network and when is used? This user does not know. In modern phones switch between networks happens automatically, to keep call of good quality, without the users knowledge. So, the users, by reporting just minutes of calls in epidemiological studies, provide useless information on radiation exposure.

This poor radiation dosimetry in the all to-date executed epidemiological studies is the main reason why I, personally, do not agree with the calls to upgrade the carcinogenicity of the RF-EMF to the group 1 of the IARC scale. We have indications that RF-EMF is possibly (group 2B) or even probably (group 2A) carcinogenic, likely only to some selected group of more sensitive persons (do not mix with self-diagnosed EHS!), but we do not have yet solid scientific proof that the RF-EMF is actually carcinogenic in humans.

This is why I call for the use of the Precautionary Principle in matters of RF-EMF. For now, as long as the health risk question is not resolved scientifically to a better degree of reliability.

The only way to avoid some of the problems of radiation exposure in epidemiological studies is to install on cell phones (smart phones) of the participants of the epidemiological studies an app that will record on-line, up-link and down-link exposures, all exposures to network, cell phone and wi-fi. There are such apps available already for a couple of years, unfortunately only for Android but not for iPhone, and both COSMOS and GERoNiMO are kind of thinking to implement their use. Hopefully it will happen soon and the data of real radiation exposure will begin to be collected.

Pity that such “new avenues” in dosimetry for epidemiological studies were not explored in this last plenary session of the BioEM2016.