Following yesterday’s (April 4, 2016) publication of the blog “ICNIRP did it again…“, I received today (April 5, 2016) message from Mike Repacholi, Chairman Emeritus of ICNIRP.

With Mike’s permission I am posting his entire message with my responses and clarifications. List of persons “CC” in Mike’s message I covered, out of my own desire of preserving privacy. 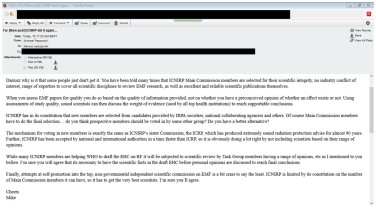 Repacholi: “Dariusz why is it that some people just don’t get it. You have been told many times that ICNIRP Main Commission members are selected for their scientific integrity, no industry conflict of interest, range of expertise to cover all scientific disciplines to review EMF research, as well as excellent and reliable scientific publications themselves.”

Leszczynski: No argument here. The members of the Main Commission of ICNIRP are experts, and so I said in the end of my post. What you describe is an ideal situation. As we well know, real life differs from the ideal. Furthermore, the only assurance of the fulfilment of these requirements is via self-policing. It has been shown in scientific studies that the self-policing does not work unless there is a possibility that some higher authority may check whether indeed all requirements are met and the self-policing works. Without such overlook, self-policing does not work, no matter what ICNIRP says. As I said in my post “…ICNIRP consensus” is not the scientific consensus…” ICNIRP’s avoidance of real scientific debate leads to problems – dissatisfied scientists and citizens go to politicians and courts. I can reverse your question and ask “why it is that ICNIRP just doesn’t get it”.

Repacholi: “When you assess EMF papers for quality you do so based on the quality of information provided, not on whether you have a preconceived opinion of whether an effect exists or not. Using assessments of study quality, sound scientists can then discuss the weight of evidence (used by all top health institutions) to reach supportable conclusions.”

Leszczynski: Here is a problem. Every expert has opinion. With this opinion he/she comes to work in expert committee. This applies to ICNIRP members too. I hope you are not suggesting that only the scientists of the Main Commission of ICNIRP are able to leave their opinions behind and evaluate the science for its merits alone. However, there is difference between the committee where work scientists with diverse opinions and with the committee where work scientists with very similar opinions. Scientists are humans and act as humans, with all ballasting baggage of pre-existing feelings and opinions. It is certain that the absolute “forgetting” of the pre-appointment opinions is not possible. Thus, scientists with no-effect opinion will easier accept no-effect studies and will look more closely for shortcomings in yes-effect studies. And the same will happen with the scientists having yes-effect opinion. They will easier accept studies showing yes-effect and look more closely for shortcomings in no-effect studies. Here is the problem. If all members of the Main Commission are of the same opinion, the scientific debate will be limited and likely skewed. In my post I referred to IARC 2011 and included list of names of scientists not as a “self-promoting gig” but to demonstrate that out there are credible scientists with diverse opinions who can be engaged to enhance the quality and versatility of the scientific debate in ICNIRP and in EHC Task group – “why it is that ICNIRP just doesn’t get it”.

Repacholi: “ICNIRP has in its constitution that new members are selected from candidates provided by IRPA societies, national collaborating agencies and others. Of course Main Commission members have to do the final selection… do you think prospective members should be voted in by some other group? Do you have a better alternative?”

Leszczynski: A better alternative should be found for both, proposing the new members and for the approval of the qualified members. Self-policing exercised by ICNIRP does not work. Studies have shown that if there is no any, potentially interfering and intervening, supervision, the self-policing does not work. Without supervision there is a danger that the self-policing will turn even the best constitution into a cronyism, the good fellas system. This is not a good outcome for the evaluation of science- “why it is that ICNIRP just doesn’t get it”.

Repacholi: “The mechanism for voting in new members is exactly the same as ICNIRP’s sister Commission, the ICRP, which has produced extremely sound radiation protection advise for almost 90 years. Further, ICNIRP has been accepted by national and international authorities in a time faster than ICRP, so it is obviously doing a lot right by not including scientists based on their range of opinions.”

Repacholi: “While many ICNIRP members are helping WHO to draft the EHC on RF it will be subjected to scientific review by Task Group members having a range of opinions, etc as I mentioned to you before. I’m sure you will agree that its necessary to have the scientific facts in the draft EHC before personal opinions are discussed to reach final conclusions.”

Leszczynski: The draft of the Environmental Health criteria was very one-sided in presenting science. However, indeed, it was only a draft. Now it will be see how the Task Group will be composed and how diverse opinions (pre-appointment) will be there. Of course, all Task Group members will be expected to leave their “old” opinions and look with “fresh eye” on the evidence presented in EHC draft and elsewhere. I hope that the Task Group composition will resemble more the IARC experts group and not the ICNIRP Main Commission – I hope that ICNIRP gets it.

Repacholi: “Finally, attempts at self-promotion into the top, non-governmental independent scientific commission on EMF is a bit crass to say the least. ICNIRP is limited by its constitution on the number of Main Commission members it can have, so it has to get the very best scientists. I’m sure you’ll agree.”

Leszczynski: I am sure many will disagree with whom you consider “the very best scientists”. However, I did not say anything against the quality of the scientific expertise presented by all individual scientists of the past, current and forthcoming Main Commission of ICNIRP. They all are experts in their respective fields of research. What I said is that this group does not represent all valid views and opinions and this will skew the direction of the debate evaluating the scientific evidence. Just the “laws of human nature” will be enough to cause it – “why it is that ICNIRP just doesn’t get it”.

[For those interested, program of the forthcoming ICNIRP meeting, where the new Main Commission will formally begin its work, has been published. There is still time to submit poster abstracts – deadline is April 22, 2016.]

16 thoughts on “Mike Repacholi responds to “ICNIRP did it again…””