It is the time in Finland when the school year begins. Parents, especially of the first graders, often consider whether their child should have cell phone or not. The answer is commonly yes, because cell phone is a safety device – parents and children can reach each other in a case of emergency.

After the issue of giving a cell phone to a child is resolved, the next problem arises – should it be the old fashioned cell phone or the smart phone?

More and more often parents decide to give their children smart phone because it is not only a safety device but also, when used responsibly, an educational device.

Parents think that since everyone around has a cell phone or smart phone, since authorities inform that devices are safe and since no “dead bodies” are seen on the streets, all must be OK. Most commonly parents do not even bother to think about radiation exposures. Authorities say it is safe technology then it must be safe…

However, looking at the history of human health risks might provide same cautionary tales… Not many remember or think that, for many tens of years, authorities and physicians were even encouraging to smoke tobacco – it was safe, it was good for your nerves, it was good for the economy, it was fashionable and smart… Also then, there were no “dead bodies” on the street. Not every smoker gets or dies of lung cancer… Seemingly, no problem. It took tens of years of research to get conclusive evidence of health risks and years of legal wrangling to make certain that everyone knows that smoking tobacco is unhealthy… but still people smoke…

The same might happen with cell phones and smart phones. There is no “life” without them so people will be using them – this is for sure. However, for now, while still waiting, for a few decades, for the conclusive evidence of ‘hazard or no hazard’, we should use a ‘healthy dose’ of precaution… Just in case…

To convince us of the need for precautions, we need information, reliable and complete information about the current situation. The information helping us to make decisions, in the absence of clear messages from the authorities, is being actively hidden by the appropriate authorities, as e.g. STUK in Finland.

A somewhat cautionary tale can be provided by our own smart phone’s battery. We often wonder that the battery needs frequent recharging. What is happening with all this energy “disappearing” rapidly from our battery? It does not vanish. It is emitted by your cell phone as radiation that is absorbed by some parts of our body… wherever is the pocket we keep our phone… It is already well known that “Many free Android apps are constantly pinging URLs, which could drain your battery…”. 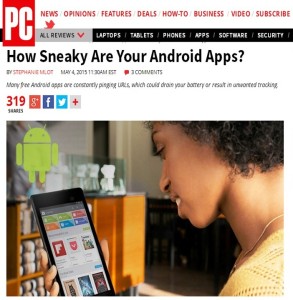 This energy, drained from the battery, is emitted as radiation during the pinging… and STUK experts should know it and warn about it. But STUK experts have chosen to not inform.

Finland’s Radiation and Nuclear Safety Authority, known also as STUK, abbreviation derived from its Finnish name Säteilyturvakeskus, is a governmental organization responsible for assuring radiation safety in Finland. It provides expert advice to the Government, Parliamentarians, the industry and the general public about diverse issues associated with all types of radiation, radiation exposures, radiation use and radiation safety.

On June 18, 2014, I posted the blog on BRHP: “STUK in Finland misinforms the Government, Parliamentarians and the general public” [it is essential to read that blog in order to fully understand this blog post]. In that post I criticized STUK for providing false information on radiation exposures caused by the smart phones:

“The experts form STUK – Radiation and Nuclear Safety authority still give the following advice: when the user talks then he/she is exposed to radiation but when the phone is idle then the exposure to radiation is practically negligible.”

This is not the truth. As I, further, wrote in the above mentioned 2014 BRHP blog post:

“Smart phones, when we do not speak, might emit even more radiation that our body may absorb, when we keep the phone in pocket or elsewhere close to the body. Smart phones constantly update information from the Internet, when checking emails, Facebook, twitter, LinkedIn, Instagram, newsmedia and whatever else we use on our smart phone. Therefore, smart phones should NEVER BE KEPT IN POCKETS close to the vital organs because they emit significant amounts of radiation also when we do not speak.”

All this seems to not get through to STUK experts. My messages hit the proverbial ‘brick wall’.

In spring of 2015, I again viewed the website of STUK and noticed that the information concerning increased exposures from smart phones remains unchanged. STUK simply ignores the issue. At the same time STUK claims that it provides full information about the exposures and health risks. STUK is not giving any firm recommendations but just advice because science did not provide yet the conclusive proof of health risk. Instead of clear recommendations, STUK experts advise general public to make their own judgment based on the currently available information, provided by STUK. At the same time STUK does not inform about increased radiation exposures caused by smart phones. STUK is hiding an important part of the information needed to make decisions. 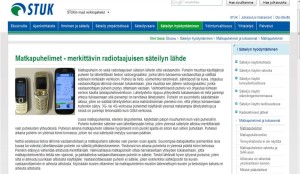 How, the general public, is supposed to make own informed decisions when the radiation experts from STUK knowingly withhold important information about exposures?

STUK experts know about the increased exposures from smart phones but arbitrarily decided to not to inform the general public. This comes out clearly from the message I received, on May 13, 2015, from Dr. Tommi Toivonen, Head of NIR Laboratory at STUK (few quotes; English translation by DL; original Finnish text available at the end of the post):

“We have given the recommendation to avoid unnecessary exposure to radiation from mobile phones and we share this message in our communications with the general public. We are focused on recommendations for speaking on the phone situations. In the light of the currently available information, it appears that phone calls are the most significant in causing radiation exposure. Therefore, in the last fall internet site update we did not see the need to change our advisory information. Technology has changed and the phone is now used for many other purposes. We follow the development of technology and continuously upgrade our recommendations when we see need for it.”

“Applications and activities that result in greater traffic from the phone to the network usually require an active phone tapping. For example, e-mail and social media applications will send larger amounts of data typically when a user sends a message. Phone is then in hand and exposure happens only to the fingers.”

“There are also applications that might send significant amounts of signal while the device is not actively tapped. As an example, the fact that the phone is used as wi-fi hot spot used for connecting wirelessly laptop to the internet and, at the same time phone is kept in the pocket. Proliferation of 4G connections has been rapid in Finland, so it is likely that wi-fi hot spot sharing of internet connection is gaining ground and becomes a commonplace. We, at STUK, currently gather measurement data from situations like wi-fi hot spot sharing and then we will consider whether there would be a need to mention this in our advisory on STUK www-pages.”

This means that STUK experts know that, in certain situations, smart phones emit more radiation than when talking on the phone. However, for whatever arbitrary reason they keep quiet… and hide behind an outdated statement:

“It should be also remembered there is still no scientific evidence of harmful effects of cell phones.”

This is another untruthful statement from STUK experts, where they dismiss evidence, some of which came from STUK scientists, and which IARC considered as sufficiently compelling to classify cell phone radiation as a possible human carcinogen.

Summa summarum, in respect to smart phones, on the contrary to their assurances, STUK experts hide important information from the general public, the Government and the Parliament.

Finally, one may ask a question whether this, ‘arbitrary hiding information by STUK’, reflects more broadly on what is the safety culture at STUK. Is there more of information that is being hidden from the general public, the Government and the Parliament, because STUK experts consider it sufficient that they know… nobody else needs to know…

The reason for such misbehavior can be only one – presenting fully and truthfully all information about risks of different technologies might hamper commercially businesses. This, STUK does not want to do, as I learned from my own personal experiences while working at STUK for nearly 22 years…

Hiding of the inconvenient to businesses information about risks of different radiation-emitting technologies gets a new context in, currently debated, building of a new nuclear power plant in Finland by Russia’s Rosatom, that will not only provide later uranium fuel but that also owns at least 34% of this nuclear power plant.

In a recent story in Finland’s major newspaper, Helsingin sanomat, Heikki Arola wrote about the, likely to be built, nuclear power plant’s safety:

How trustworthy will be the opinions that the Government, the Parliament and the general audience will receive from STUK? Technical know-how is there, at STUK, but the arbitrary decisions on what information should be revealed and what not, is another story.

At least in the case of smart phones STUK, arbitrarily, decided to hide information…

Below is the screen shot and are copied all paragraphs of the message I received from STUK. 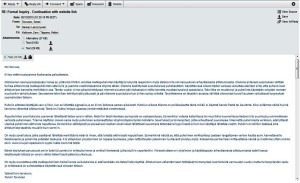 After each paragraph I inserted English translation, [in square brackets and in italics], “courtesy” of Google translator and my own corrections of the still clumsy work of the Google translator…

Puhelin altistaa käyttäjää vain silloin, kun se lähettää signaalia ja on kiinni kehossa saman aikaisesti. Puhelun aikana tilanne on poikkeuksetta tämä mikäli ei käytetä hands freetä tai kaiutinta. Siksi pidämme näitä hyvinä keinoina vähentää altistumista. Tämä on lisäksi helppo opastaa ymmärrettävästi viestinnässä. [Phone exposes the user only when it transmits a signal and it is at the same time attached to the body. This happens during a call if not using hands free or speaker mode. Therefore, we consider hands free or speaker mode to be good methods to reduce exposure. This is in addition an easy message to guide understandably communicating with general public.]

On myös sovelluksia jotka saattavat lähettää merkittäviä määriä ilman, että laitetta aktiivisesti naputellaan. Esimerkkinä näistä se, että puhelimen verkkoyhteys jaetaan langattoman verkon kautta esim. kannettavalle tietokoneelle ja puhelinta pidetään taskussa. 4 G yhteyksien yleistyminen on nopeaa Suomessa, joten nettiyhteyden jakaminen luultavasti yleistyy myös. Kokoamme parhaillaan mittaustietoa näistä ja mietimme sitten olisiko esim. www-sivujen opastuksiin syytä lisätä maininta tästä. [There are also applications that might send significant amounts of signal while the device is not actively tapped. As an example, the fact that the phone is used as wi-fi hot spot used for connecting wirelessly laptop to the internet and, at the same time phone is kept in the pocket. Proliferation of 4G connections has been rapid in Finland, so it is likely that wi-fi hot spot sharing of internet connection is gaining ground and becomes a commonplace. We, at STUK, currently gather measurement data from situations like wi-fi hot spot sharing and then we will consider whether there would be a need to mention this in our advisory on STUK www-pages.]

2 thoughts on “STUK in Finland: How trustworthy is information on smart phones and… nuclear power plants…”